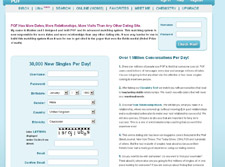 PlentyOfFish.com – now officially known as Pof.com- is undoubtedly one of the most popular dating websites ever. The site owners currently claim to have 30 million registered users around the world. The number of actual active users is estimated to be around 6 million, with 200,000 of those logged on at any one time. One of the reasons for the site’s great success is the fact that it is free. The downside of this is that Pof is funded by lots of advertising which you will have to navigate around while using the site. The site’s free membership gives you access to the full range of features, including instant messaging. There are a few extra privileges available that must be paid for, such as having your profile bumped up to the front page of search listings. Perhaps because of its huge membership, Pof has been the target of several hacker attacks. As a result, the site’s security was increased considerably in early 2011. The new security measures can present problems for new users when they are trying to get their profiles accepted. Firstly, it may take you some time to come up with a password that is sufficiently complex to meet the Pof requirements. Also, the site bans any prospective user whose computer shows an IP address from one of their banned countries. Unfortunately, there have been instances where Pof has blocked users on this basis, even when the user is not, in fact, in a banned country.
Be Sociable, Share!

Related sites in the Romance